Things to Do in Amsterdam

The Netherlands brims with beauty and adventure, from its picturesque windmills and wondrous fields of tulips to its hip, art-centric capital city of Amsterdam. The most populated region of the Netherlands, historic Amsterdam is renowned for its quaint streets and scenic canals. Take in Amsterdam’s rich tradition of art by touring iconic museums such as the Rijksmuseum and the Van Gogh Museum; tours offer skip-the-line access to these popular sights. The Anne Frank House is another must-see, attracting visitors from around the globe. A walking tour—or if you want to be like the Dutch, a bike tour—is a great way to get into the culture. For a little romance, enjoy a candlelit cruise at night with Dutch wine and cheese, and watch the city sparkle. Make time to tour the happening Red Light District’s bars and coffeeshops, and sample bitterballen (fried meatballs) and classic pickled herring, along with some of the country’s famed beers. Take a day trip or two to the Dutch countryside to admire Zaanse Schans, with its iconic windmills and clogs; or traditional villages such as Volendam and Marken. Keukenhof Gardens offers the pièce de résistance: a burst of colors from its vast array of flowers and millions of tulips. All in all, Amsterdam’s uniqueness makes it an unparalleled destination in Europe. 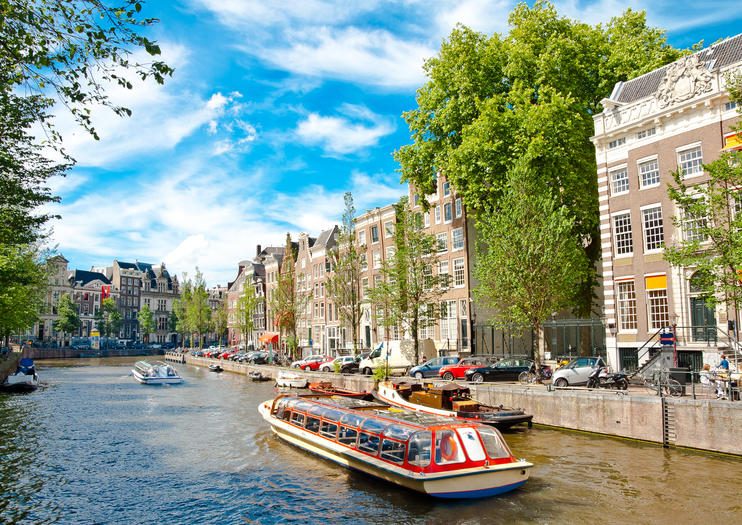 The first image one conjures up when thinking of Amsterdam is its tranquil canals. Three rings of canals, lined by elaborately decorated merchants' residences and warehouses built in the 17th century, the Dutch "Golden Age", give the city its iconic and easygoing image. In fact, 90 islands were created when the canals were built, and they’re all connected by hundreds of charming bridges. The best-known canals form the central Grachtengordel (Canal Belt). To the wandering visitor, they’re like lifelines because the subtle turns in the center can throw your inner compass out of whack. The semicircular canals form a huge ring, cut by canals radiating from the middle like spokes on a wheel. Starting from the core, the major semicircular canals are the Singel, Herengracht, Keizersgracht, and Prinsengracht. From east to west, the major radial canals are Brouwersgracht, Leidsegracht, and Reguliersgracht. 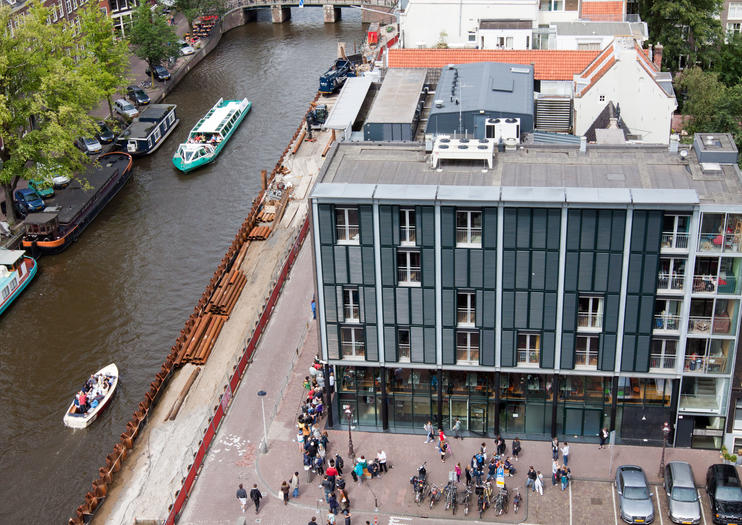 It is one of the 20th century's most compelling stories: a young Jewish girl forced into hiding with her family and their friends to escape deportation by the Nazis. The house Otto Frank used as a hideaway for his family kept them safe until close to the end of World War II.

The focus of the Anne Frank House museum is the achterhuis, also known as the secret annex. It was in this dark, airless space that the Franks observed complete silence during the day, before being mysteriously betrayed and sent to their deaths.

The Anne Frank House is pretty much intact, so as you walk through the building, it's easy to imagine Anne’s experience growing up here as she wrote her famous diary describing how restrictions were gradually imposed on Dutch Jews. 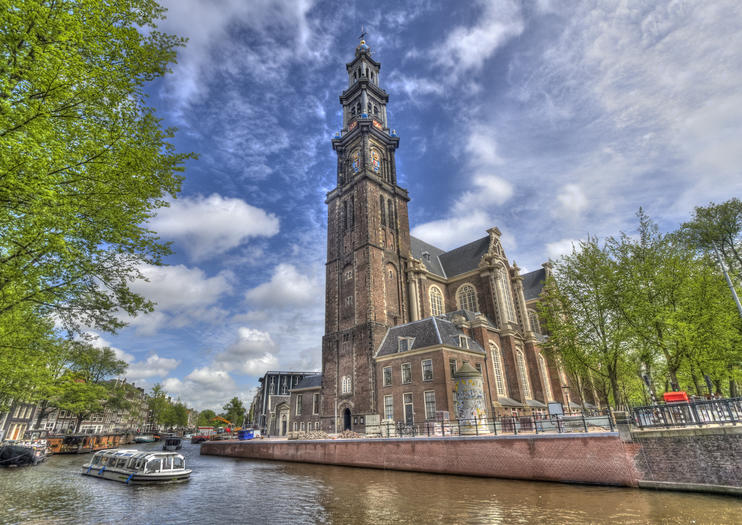 Built on the banks of Prinsengracht Canal in the 17th century, Amsterdam’s Westerkerk is famous for three things: sky-high views of Amsterdam from the top of its spire, Rembrandt's grave, and Anne Frank's ties to the church. Designed by star architect Hendrick de Keyser in the Dutch Renaissance style, the Protestant church's spire reaches 85 meters, making it the highest structure in Amsterdam's old city. From the viewing platform halfway up the tower, you'll get panoramic views right across town. And from outside the church, look up at the bell tower to see the blue imperial crown of Habsburg emperor Maximilian I at its top — it was bestowed on the city as a coat of arms in 1489.

Rembrandt’s paintings may fetch tens of millions today, but he died bankrupt in 1669 and was buried in an unmarked grave, typical for the very poor, at Westerkerk, so that no one quite knows this exact location of his final resting place where he lies buried along with his wife and son. 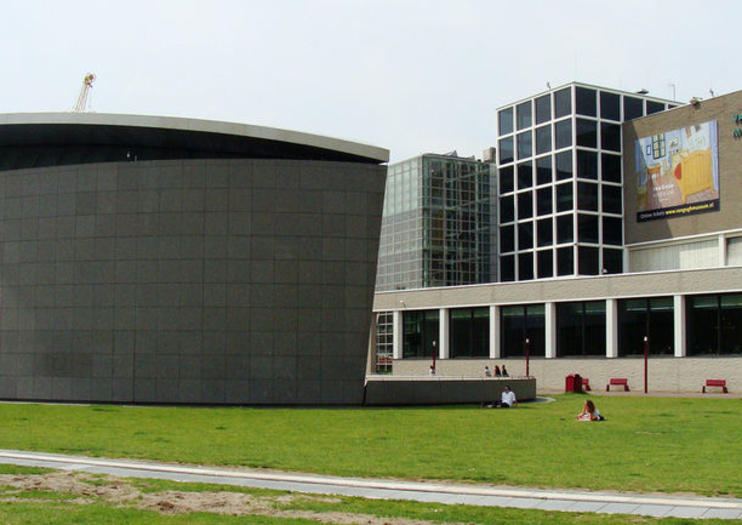 Art lovers and van Gogh fans must reward themselves with a visit to the Van Gogh Museum, one of Amsterdam's must-sees. The museum consists of about 200 paintings and 500 drawings by Vincent and his friends and contemporaries (Gauguin, Monet, Toulouse-Lautrec and Bernard), as well as many of the artist's personal effects. Famous works on display include The Potato Eaters (1885), The Yellow House in Arles (1888) and The Bedroom (1888). One of his last paintings, Wheatfield with Crows (1890), is an ominous work finished shortly before his suicide. Of special note is the wall on the second floor, which displays 18 paintings produced during a two year period in the south of France, generally considered to be his artistic high point. A new wing,set partly underground, showcases temporary exhibits by van Gogh and other artists. 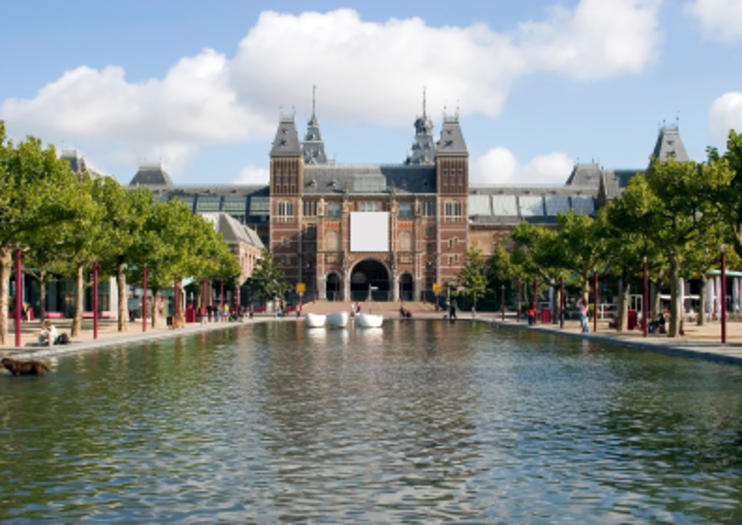 The Rijksmuseum, or National Museum, is the premier art museum of the Netherlands, and no self-respecting visitor to Amsterdam can afford to miss it. Though most of the building is closed for renovations until 2013, key paintings from the museum’s permanent collection can be viewed in the Philips Wing.

The collection includes some 5,000 paintings, most importantly those by Dutch and Flemish masters from the 15th to 19th centuries. The emphasis, naturally, is on the Golden Age. Pride of place is taken by Rembrandt's Nightwatch (1650), showing the militia led by Frans Banning Cocq. Other 17th century Dutch masters include Jan Vermeer (The Milkmaid, and Woman in Blue Reading a Letter), Frans Hals (The Merry Drinker) and Jan Steen (The Merry Family). 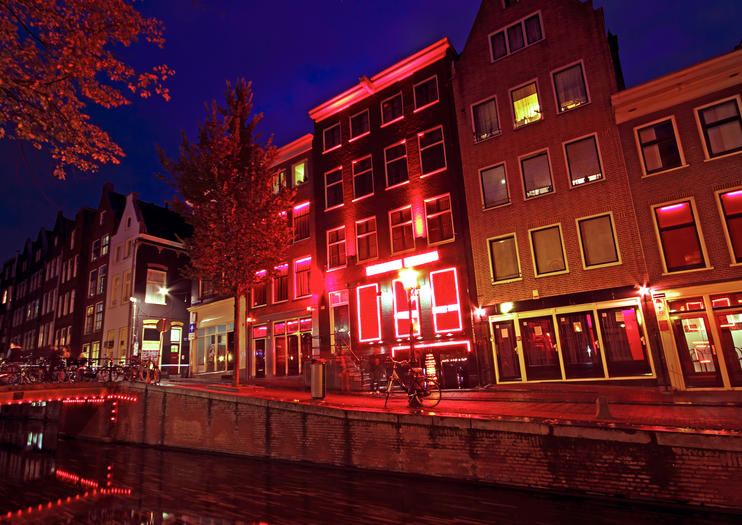 Amsterdam’s Red Light District (aka De Wallen) has been a familiar haunt for pleasure seekers since the 14th century. Though certainly not an area for everyone, the Red Light District has more to offer than just sex and liquor. For underneath its promiscuous façade, the area contains some of Amsterdam's prettiest canals, excellent bars and restaurants, and shops of all kinds. It also consists of windows with sexy girls, dressed in eye-popping underwear.

The best places for window-watching are along Oudezijds Achterburgwal and in the alleys around the Oude Kerk (Old Church), particularly to the south. The atmosphere throughout is much more laid-back than in other red-light districts. Families, lawyers, young couples, senior citizens - all types of locals live and socialize here, in stride with the surrounding commerce. You’ll probably find yourself on Warmoesstraat and Zeedijk at some point, both commercial thoroughfares chock-a-block with shops and restaurants. 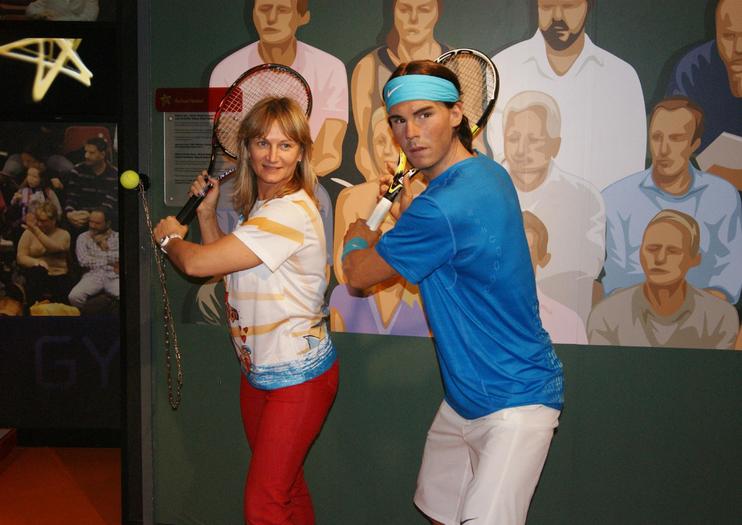 Madame Tussauds is an international attraction beloved of youngsters for its lifelike waxwork models; when the very first Madame Tussauds opened in London in 1835, it featured a gruesome chamber of horrors. Today the displays have moved on and the Amsterdam outpost exhibits a topical band of waxwork images of royalty, B-list celebs, rock gods, movie stars, sporting heroes and historical figures with a degree of accuracy lacking in some of the earlier models.

Although displays are updated frequently as the tide of celebrity waxes and wanes, Madame Tussauds Amsterdam is divided into four themed sections packed with family fun. It’s fast-paced and interactive: work out next to David Beckham in the sports zone; have your photo taken with former Queen Beatrix; attend a political meeting with President Obama and Germany’s Angela Merkel; attend an A List party with world icons such as Robbie Williams, Robert Pattinson and J-Lo; or paint a work of art in the style of Picasso. 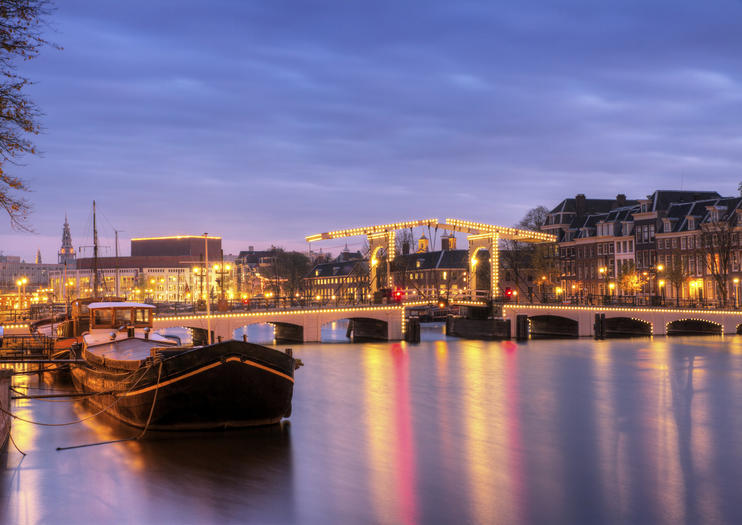 Magere Brug is a bridge in Amsterdam that crosses the Amstel River. Its name translates as “skinny bridge” and comes from the original bridge that was so skinny, it was difficult for two people to pass each other while walking across it at the same time. Legend also has it that the bridge was built by the Mager sisters to make it easier to visit each other since they lived on opposite sides of the river. Though it is still called the Skinny Bridge, today it is no longer so skinny. The bridge was replaced with a wider one in 1871, and now pedestrians and bicycles can cross with greater ease.

The bridge is a wooden drawbridge that is raised frequently throughout the day to allow boats to pass through. At night it is lit up by over 1,000 light bulbs. Day or night, the Skinny Bridge is a charming place to visit and enjoy views of the river and the city. 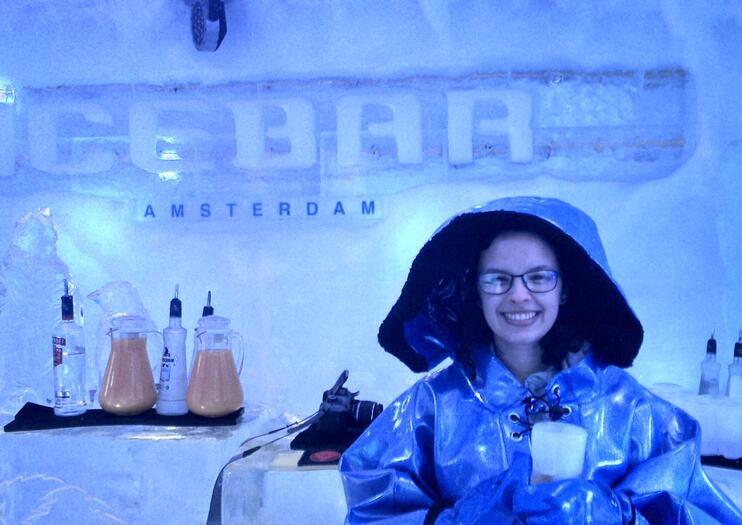 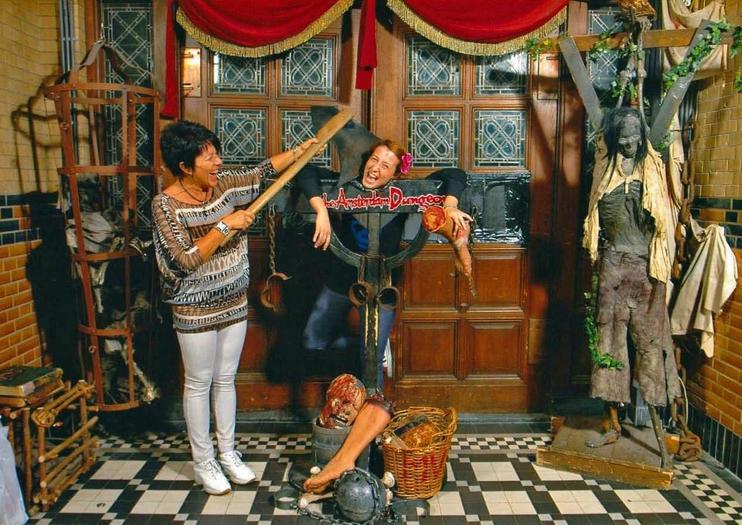 Visitors to Amsterdam, feel the fear. Just how many ways were there to die in the old city? Find out at the Amsterdam Dungeon as you experience the city’s horrible past – you’ll encounter plague victims, suffer tortured screams as the Spanish Inquisition comes to town and hear the dying groans of scurvy-ridden sailors as their ship Batavia sails into the Doldrums. Drop through the darkness into the bowels of the earth on simulator rides and despair as you lose your way in the Labyrinth of the Lost. New among the 11 terrifying actor-led interactive shows at the Dungeon in ‘Murder on the Zeedijk’ – just when will the moaning spirit of lonely Helena ambush you?

If you like your horror with a modicum of kitsch and humor, then this is the place for you. But be warned, while most teenagers will love the Amsterdam Dungeon, it’s probably not the place for young kids.