Things to Do in Barcelona

As a more than 2,000-year-old city, Barcelona displays a complex yet beguiling cultural heritage, shown in its exquisite art, architecture, and cuisine. Legendary creatives such as Salvador Dalí, Pablo Picasso, and Antoni Gaudí were inspired by the historic Mediterranean town in northeastern Spain, and they each left their distinctive mark. Many sightseeing tours with knowledgeable guides are available to help navigate the multitude of attractions and offer historical perspective. A hop-on hop-off tour bus tour provides an opportunity to see all of Barcelona’s most popular sights quickly, with stops including the historic Gothic Quarter of Las Ramblas; Picasso Museum; FC Barcelona stadium Camp Nou; the Olympic Stadium; and Gaudi’s structural masterpieces, such as Park Güell, Casa Batlló, La Pedrera, and the soaring (and unfinished) Sagrada Família. Segway tours, bike tours, walking tours, and private tours are also superb for close-up Barcelona sightseeing. Lines at top attractions can be long during the summer months, making Barcelona tours with skip-the-line tickets a real time-saver. Culturally enriching, scenic day trips around the region include tours of Montserrat monastery, Sitges, the Dali museum in Figueres, and the Costa Brava town of Gironès. For a taste of Barcelona, have a local guide you through the city’s ubiquitous tapas and paellas and to the best local fare at the public market La Boqueria, or take a Barcelona cooking class. An abundance of varietals are produced in the Catalonia region, and wine-tasting tours are available in the city or as part of a day trip. 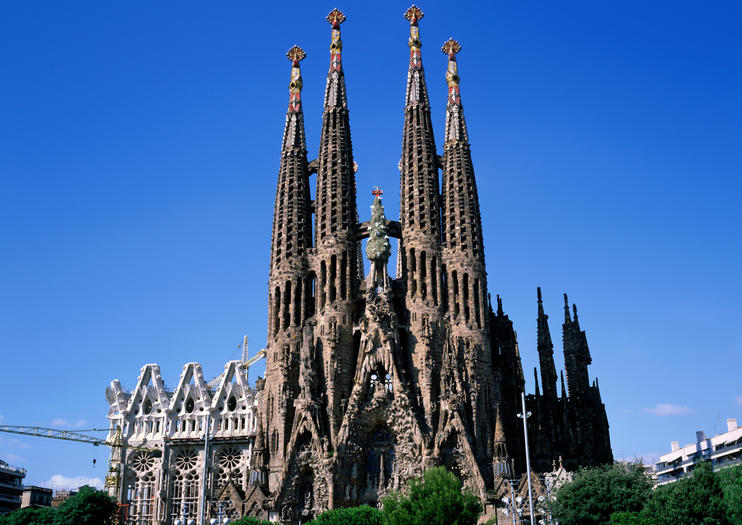 La Sagrada Familia is no doubt the most iconic structure in Barcelona. The church, located in L'Eixample, has been a fixture in Barcelona since construction commenced in 1882 and as building continues on today the structure's fame only grows.

Though still a work in progress, the church already is an amazingly intricate structure. Antoni Gaudí spent 43 years on this project and, since his death in 1926, the duty to finish it has been passed on to several architects. Though the responsibility continues to change hands over the years, the architects have all respected Gaudí's vision and have made additions with his design in mind. Inside the church has an impressive stained glass windows line the main room and a lift takes visitors up one of the towers to enjoy the view. Smaller rooms hold exhibits detailing the history and future of the structure. La Sagrada Familia is projected to be completed in 2026, the 100th anniversary of Gaudí. 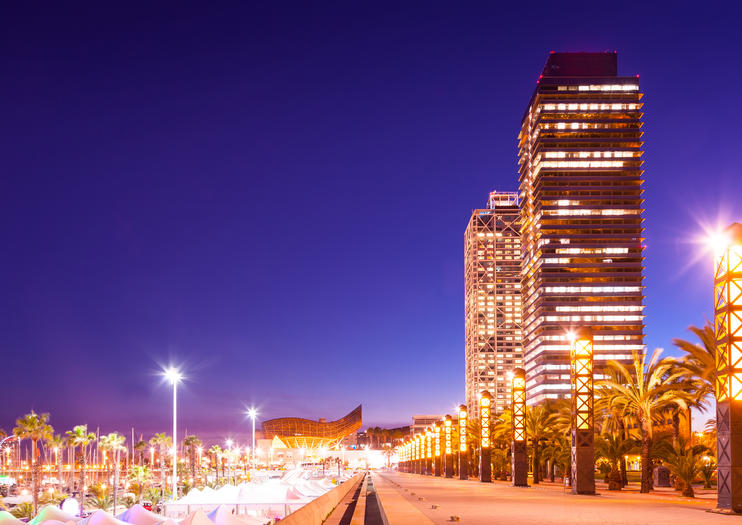 Facing the Olympic Village of the 1992 Olympic Games in Barcelona, the Port Olimpic was built as a part of the redevelopment of the area in preparation for the event. With its proximity to the beach area and its iconic art and sculpture, it has become one of the most popular leisure areas in the city.

Surrounded on both sides by skyscrapers such as the prominent Torre Mapfre and the Hotel Arts, the port is a marina for over 700 boats. The view of the many yachts on the water is something to see, as is the masterful copper ‘Peix’ or fish sculpture by architect Frank Gehry. This is also the jumping off point for many sailing trips on the Mediterranean Sea. There are dozens of dining and shopping options along the area, as well as that famous Barcelona nightlife once the sun goes down. The Barceloneta and Nova Icaria beaches can be found on either side. 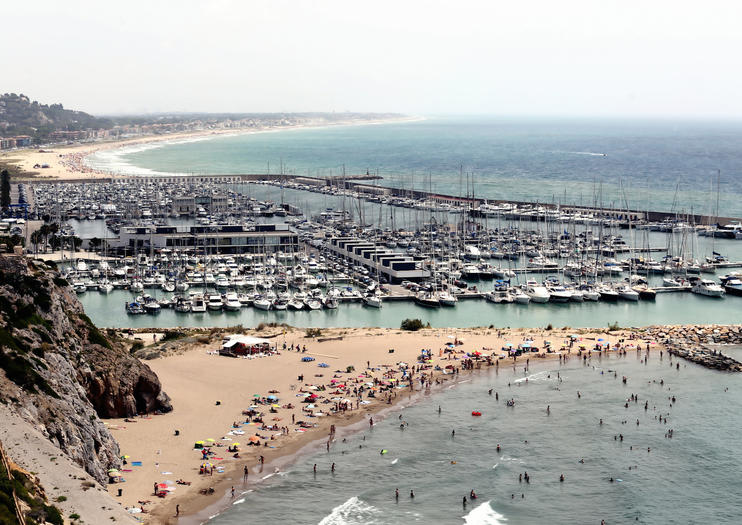 Welcome to the vibrant Catalan capital, Barcelona! With its laid-back Mediterranean setting, exciting Modernist architecture and labyrinthine Gothic Quarter, Barcelona has enough shore excursions and activities to keep you bar-hopping and sightseeing for days.

Barcelona’s cruise terminals are clustered in historic Port Vell at the foot of Las Ramblas, Barcelona’s most famous thoroughfare. It’s a 10 to 30-minute walk to Las Ramblas and the Gothic Quarter. Most visitors catch a shuttle bus to the iconic Christopher Columbus statue, a minute’s stroll from Las Ramblas. A quick taxi ride to the Gothic Quarter takes only 10 minutes from the port.

It’s de rigueur to take a stroll along tree-lined Las Ramblas, with its flower stalls and singing birds. Drop into Barcelona’s historic market for tapas and champagne, then follow winding streets through the Gothic Quarter to the centuries-old cathedral.

Strategically located at the meeting point of La Rambla and Passeig de Gràcia, two of Barcelona’s busiest boulevards, Catalunya Square (Plaça de Catalunya) makes a strategic starting point for walking tours of the city. More than just a navigational landmark, Catalunya Square is also the symbolic heart of Barcelona and the large, tree-lined plaza is abuzz with activity both day and night.

As well as being surrounded by restaurants, cafes and bars, including the iconic Cafe Zurich and the Hard Rock Café, Catalunya Square is also home to large department stores like El Corte Inglés, FNAC and Habitat, a pair of dramatically illuminated fountains and a number of monumental sculptures, including the white marble La Deessa by Josep Clara and Josep Subirachs’s Monument of Francesc Macià. 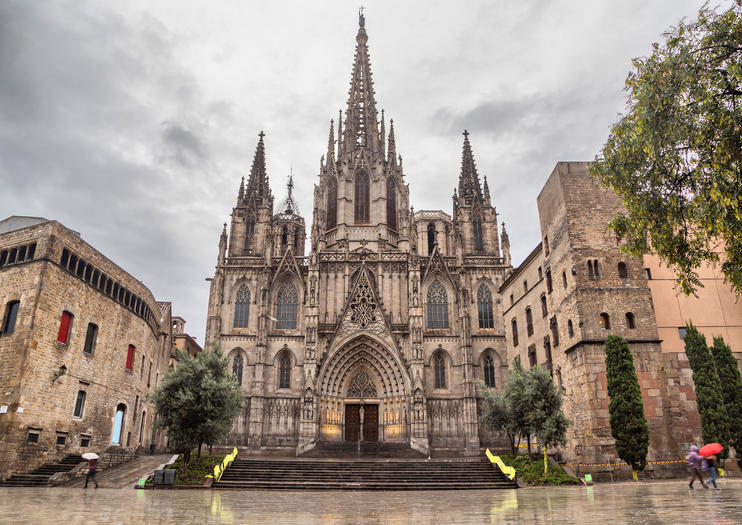 Standing tall over a medieval square in the center of Barcelona’s Gothic Quarter, the Barcelona Cathedral (known formally as the Cathedral of the Holy Cross and Saint Eulalia, or La Seu) is the seat of the Archbishop of Spain and a major landmark of the city. With octagonal bell towers, five aisles and two chapel areas, the hall church has stood since the 13th century. It is dedicated to Saint Eulalia, a patron saint of Barcelona, whose body is entombed in the crypt. Large, colorful stained glass windows look over twenty eight total small chapels inside.

The Cathedral is known for its 14th-century cloister full of palm trees and a lush garden, as well as a massive Gothic portico under which thirteen geese can be found wandering. Each goose represents a year of the life of the young Saint Eulalia. As for the exterior, it is carved in great Gothic style detail — and is particularly beautiful when illuminated at night. 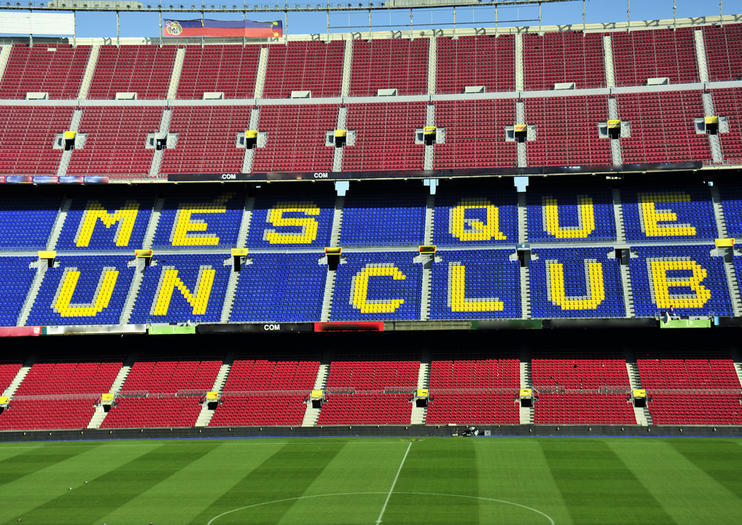 Football fans won’t want to miss a visit to the Camp Nou Football Stadium, the home ground of FC Barcelona and the largest stadium in Europe. Inaugurated in 1957, the venue has hosted a number of key international games, including the FIFA World Cup, the European Champions’ Cup and two UEFA Champions League Finals.

During your tour of the 55,000-square-meter stadium, designed by architects Francesc Mitjans, Josep Soteras, and Lorenzo García-Barbón, you'll walk through the players’ tunnel and across the pitch. You’ll also get to visit the Chapel, the TV room, the Press Room, the Sports Medicine Center, the Fundacio Zone, team locker rooms and the luxury Presidential Box. End your visit at the FC Barcelona Museum and have your picture taken with the European Champions Cup. 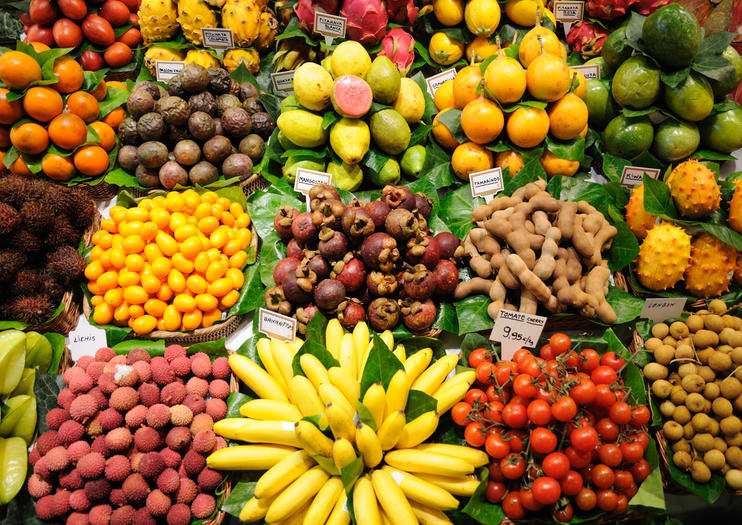 Barcelona’s busiest market and arguably one of Europe’s most popular food markets, La Boqueria Market, or Mercat de La Boqueria, is a vibrant hub of Barcelonian culture. The market boasts a long history, with the spot being used as a meat market as far back as the 13th century, but today the market is held in the Mercat de Sant Josep market hall in La Rambla, a Modernist iron and glass canopy built in 1914. Whether you’re sourcing ingredients for the perfect paella or just soaking up the unique atmosphere, few experiences are as quintessentially Barcelonian as haggling for produce in the city’s liveliest market.

Over 200 stalls stand in the market and weaving through the crowds of locals and tourists, there’s a myriad of produce on display. Piles of fresh fruits and vegetables, pails of glistening olives and huge slabs of cheese and foie gras line the stalls, alongside an array of local seafood and varying cuts of meat, including the odd pig head. 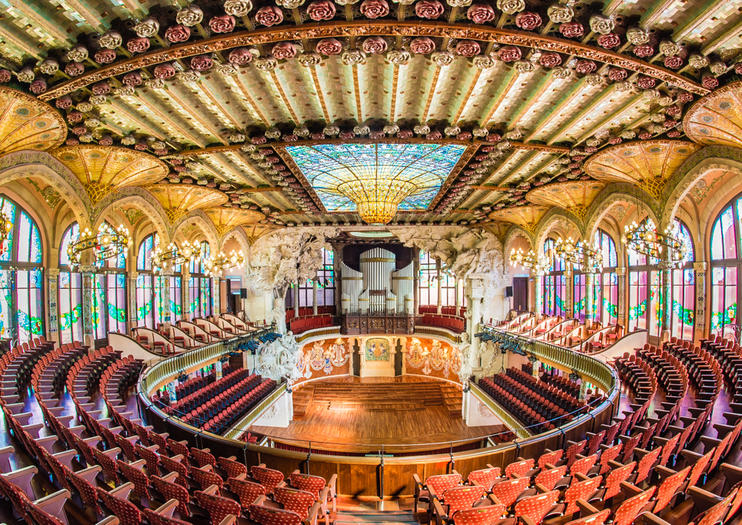 One of Barcelona’s most impressive architectural feats, presiding over the streets of La Ribera, the Palau de la Música Catalana is one of the city’s most popular concert halls, renowned for its spectacularly ornate interiors. Built in 1908 to designs by Catalan modernista architect Lluís Domènech i Montaner, the concert hall was initially built to house the Orfeó Català choir and remains an important venue for a range of traditional Catalan folk music.

Declared a UNESCO World Heritage Site in 1997, the concert hall features décor by some of the era’s most prominent Catalan architects – a sumptuous museum including ceramic mosaics and relief busts by Eusebi Arnau, a stone arch by Pau Gargallo, vibrant mosaics by Lluís Bru and stained glasswork by Antoni Rigalt.

Although the concert hall is not renowned for its acoustics, the Palau provides a suitably glittering backdrop to performances, making attending a concert at the venue a rich audio-visual experience. 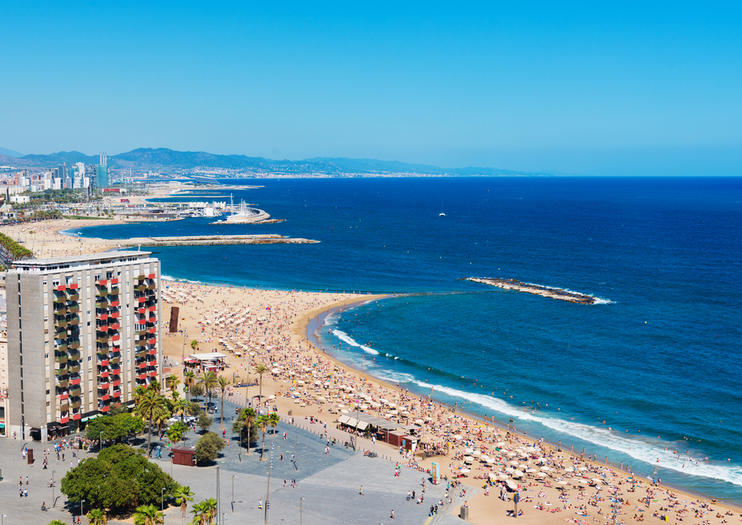 Few cities do urban beaches with as much panache as Barcelona and with 4.2 km of sandy coastline, there are plenty of options to choose from. The most popular is the Barceloneta Beach, an easy bus ride from the city center and crammed with locals and tourists during the summer months.

Whether you’re looking to escape the city heat, top up your suntan or take a dip in the cool Mediterranean, Barceloneta has plenty of options to keep beach-goers busy. Sip a sangria at one of the many chiringuitos (beach bars) along the waterfront, join the locals in a game of beach tennis or volleyball; or explore the souvenir stores and cafés crammed along the beachside Passeig Maritim boulevard. Active types can enjoy water sports like surfing, windsurfing and kite surfing or hit the lively boardwalk – a popular spot for walkers, joggers and cyclists. 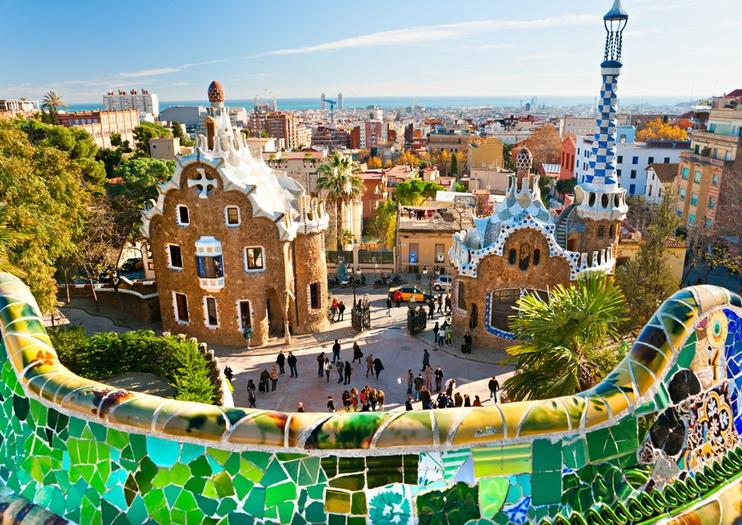 Park Güell is known as one of Gaudí's most colorful works and its expansive display of this artist's playful architecture is what makes it one of Barcelona's top attractions. While the park was originally meant to be a housing development for rich socialites, when the wealthy decided not to move to the hilltop, it became a public playground.

Gaudí spent the first 15 years of the 20th century constructing the numerous fountains, pedestrian walkways and benches in his signature style that are still enjoyed by visitors today. One of the most popular spots in the park is at the top of the hill, where from brightly colored mosaic seats you can take in the panoramic view over Barcelona city and capture some great photos of the park.

Another must-see attraction in Park Güell is the Gaudí House Museum. This pink house near the base of the park is where Gaudí spent the last two decades of his life and it is filled with furniture and other works designed by the artist.